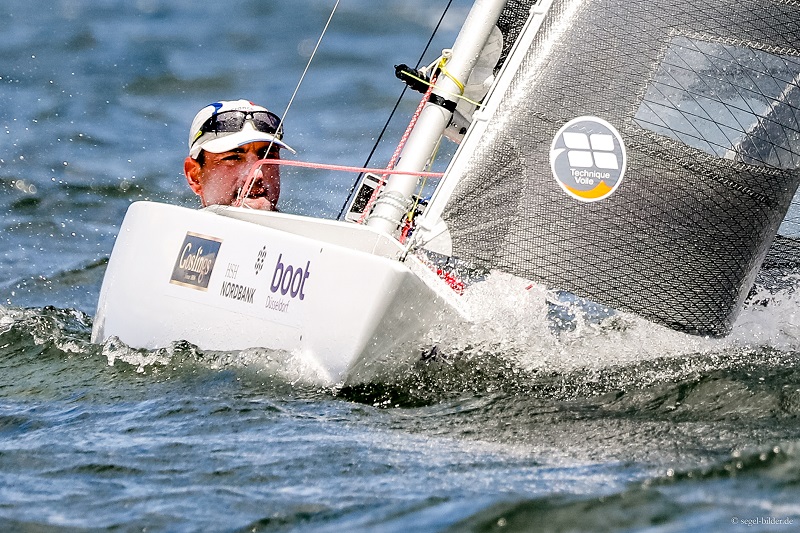 "On the final day it was different", said the Eurosaf Para Sailing European Championships winner in the 2.4mR Damien Seguin (France) beaming with joy: The wind had been less. But in big or lighter winds, Damien Seguin was almost always in the front. He also won the Medal Race and can now look back to an almost perfect series of victories. On his results' list was only one second place, which was the discard and thus removed from the overall rating. "It was special." Seven victories during the past days is not usual for him either. And it was never that obvious on the water, as you might think looking at the ranking. In particular, it was very close with Heiko Kroeger. He just has always had that little bit more. Like in the Medal Race, when he had a perfect start. Heiko Kroeger crossed the finish line as the fourth boat and thus was on rank two in the end.

To keep the rank was the objective of Lasse Koetzing on the final day. He entered the race on rank three. To move up even more, was not possible. Therefore he wanted to defend his bronze position. "It went quite well. I did not have any real failures." He also got along well with the conditions. Since he had not sailed much in the last one and a half years, he was not looking at any specific ranking. In the Medal Race, he did attack once more short before the finish. But although he came close to the Norwegian, who was before him, he just did not make it. As the third at the finish line, he could confirm his target from the morning and could save the bronze medal for him.

"The usual suspects are in the front", stated Lasse Koetzing about the fleet, regretting that the fleet was quite small. "However we can be satisfied, that so many sailors came." After the Kiel Week he wants to concentrate mainly on his engineering studies and only sail the German Championships. "I am not coming to the Worlds." Since the 2.4mR is not Paralympic anymore, he wanted to demonstrate, that the boat class is still active, but is not under pressure anymore regarding qualifications. And on a financial level, the conditions are also different.

With a cheer, Piotr Cichocki (Poland) did jump from his Hansa 303 into the water at the marina and brought his boat back to the slipping area while swimming. "I am very happy", the new Para European Champion said with excitement. "It was a good race, good winds, but no good weather", was his conclusion of the last race day. "Sailing is my life. I am on the water each day. It is my work", explained Cichocki, who became fourth non-stop round the world in "The Race" 2000 on the catamaran Warta Polpharma with skipper Roman Paszke.

"In the end, it is all good", Jens Kroker is happy about his regained second place. At the start, he had not found the right distance to the mark and had to start on starboard. Afterwards, he moved up in the fleet from behind and finished as second. "That worked well. A nice finale." Piotr Cichocki could not be overtaken anymore after the optimum start. But Jens Kroker is nevertheless happy about the silver medal. "It could not have gone any better." Waldemar Wozniak from Poland did win bronze.