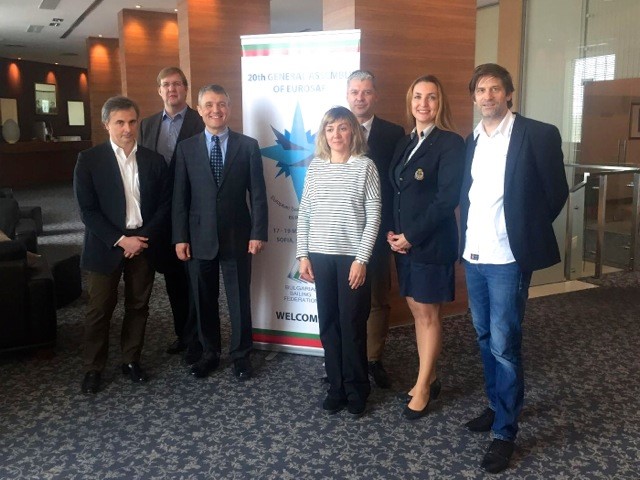 Under the auspices of the Bulgarian Minister of Youth and Sports and after months of preparation and internal discussions, a new Constitution was approved by the Members. A document that will give the Continental Federation for Sailing in Europe the framework and ability to handle the challenges faced by sailing in particular, and all sports in general, as we move into the 21st century.

In addition to approving the new Constitution, a new Executive Committee was elected. Josep M. Pla, from Andorra, will lead EUROSAF as President. He is supported by six Vice-Presidents, including Tomasz Chamera, from Poland, as First Vice-President.

Following a brief Executive Board Meeting after the General Assembly had finished, the new Board invited all delegates to an open forum discussion to gather opinions from around the continent. “We have found that European countries have quite a lot of in common when it comes to the sport of sailing, but also a lot of diverse challenges are being faced in different parts of Europe. In the end it was a very fruitful exchange of ideas and helped to bring together a comprehensive picture of what sailing in Europe is about”, said Josep M. Pla, the newly elected President.

“Our goal is to bring more people to have fun sailing and to succeed as sailors and as persons. The newly elected Executive Board will work hard to develop a fluid communication with EUROSAF Members, to align the goals of EUROSAF with those of its Members, and to cooperate with them in favour of the sport. We are fortunate to have on board a good mix of new and experienced Executive Board members. I’m also very pleased EUROSAF presents gender equality among its Vice Presidents as a natural outcome of the election. I am sure this Executive Board is ready for the challenges of the upcoming years.”

“It is a honour to succeed John Friend as a Secretary General. He was the heart of EUROSAF for more than a decade. Throughout the last weeks and months we have worked together to effect a handover and we will continue to work together in the months to come until the work is completed.  Now we are moving into a new office in Neusiedl am See, near Vienna, in Austria, which is the next step in the development of EUROSAF and we hope to report more on the facilities afforded to us in Austria in the coming months.  This is an exciting time for our organisation.

EUROSAF is the Continental Association of European national sailing federations. It was founded in Rome in 1998 and counts 41 members.